Spain has been on my list to visit for some time now and last summer we got to spend a whole 5 days there on our sibling Euro Trip.

The first time I remembering hearing specifically about southern Spain was in my college sophomore “Spanish Culture & History” class.  Before this class my knowledge of Spain was that it’s home to tapas, bull fighting, and Spanish.  As it turns out, Spain has a lot more going on.

For example, did you know that southern Spain was ruled by Muslims for about 780 years?  Muslims and Jews were both expelled from Spain in 1492 after a very long (about 780 year) war.  Christopher Columbus wasn’t the only one doing things for Spain that year, I guess.  Now, 500 years after the Muslims (or Moors, as they were called) were defeated, you can still see, hear, and taste the Muslim influence in this region.

My entire goal when planning a visit to Granada was to see the Alhambra.  Quite by accident, we ended up staying in a perfect part of town to see everything else too.  Our hotel ended up being walking distance from all the best neighborhoods and a block from the bus, which made for easy airport and Alhambra transport.  We stayed at Hotel Inglaterra and I would recommended it based on location, helpfulness of staff, and general cleanliness.

Our balcony. Big enough for toes.

As I mentioned, the Alhambra was our goal.  The Alhambra is a palace and fortress complex that was built in the 13th century by Mohammad ben Al-Ahmar, of the last dynasty of Muslim rulers in Spain.  When the region was finally reclaimed by Christians the Alhambra became the royal court for King Ferdinand and Queen Isabella.  There is a lot more history involved with these grounds but I’m going to leave that for you to discover when you book a tour like we did.

Our first impression of the palace was of the gardens.  Tranquil and immaculate, they are hidden behind walls, enclosed in courtyards and floating on terraces.  According to our guide, the private gardens reflect the Muslim values of intimacy and privacy, with true beauty pointing up to heaven. Renaissance style, right in the midst. 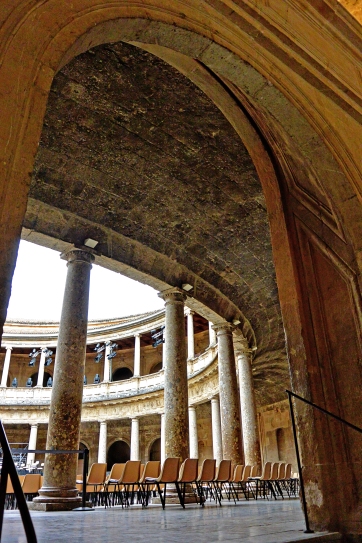 The interior, very unlike southern Spain. 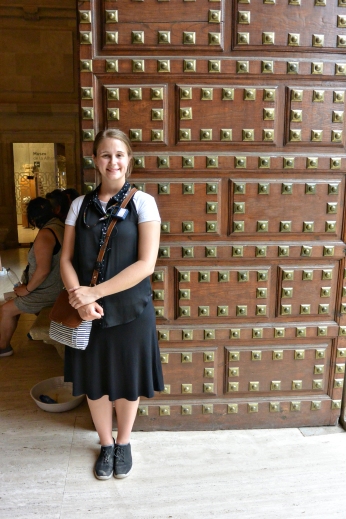 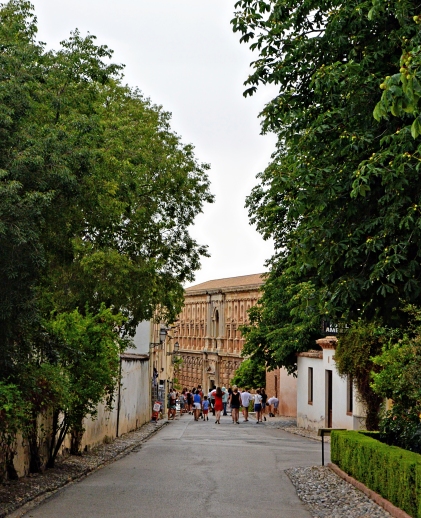 The main palace is a labyrinth of intricately designed walls and doors leading through more gardens and royal rooms (like throne rooms and entry halls).  Themes of heavenward facing designs, calm waters, and detailed geometry permeate the spaces.

Day two of our stay we headed to the UNESCO World Heritage neighborhood Albaicin, essentially the old Muslim quarter.  There we found markets, white walled homes, and hidden gardens. 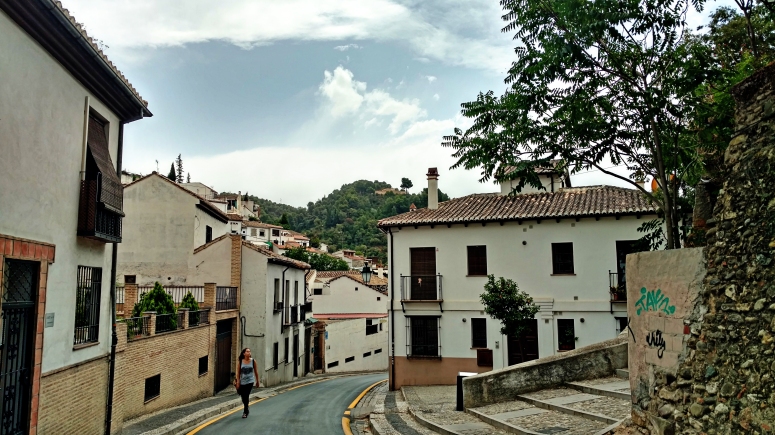 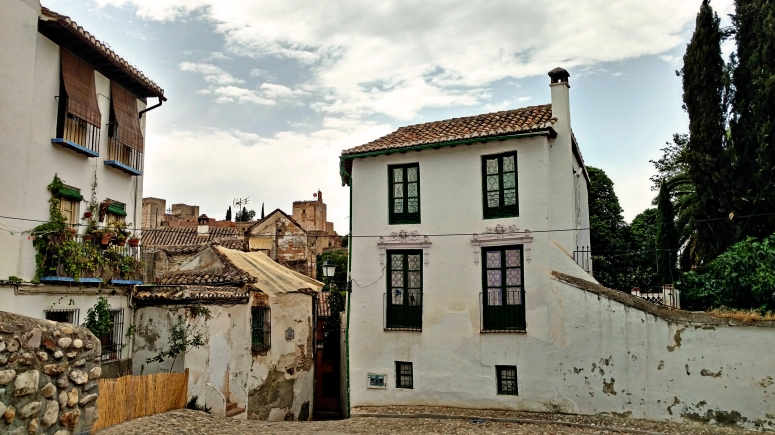 Literally miles of white homes to walk through. 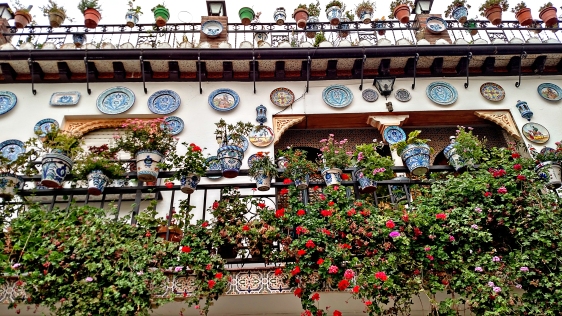 I cannot explain the blue dishes on the homes, but I like them. 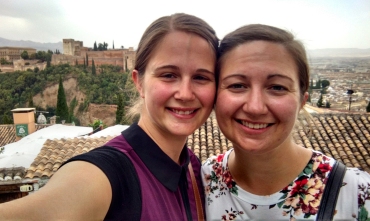 As it turns out, the Albaicin neighborhood wasn’t the only place within walking distance of our hotel that offered cool views and snacks.

While in Granada we also caught a traditional Flamenco show.  Flamenco dancing and music originate from this region and I would definitely recommend seeing a show if you’re ever there.  The shows are a combination of wailing singing and clap dancing, if there is such a thing.  The history and significance is lost to me but the experience is fun.

Excited for the show to start. 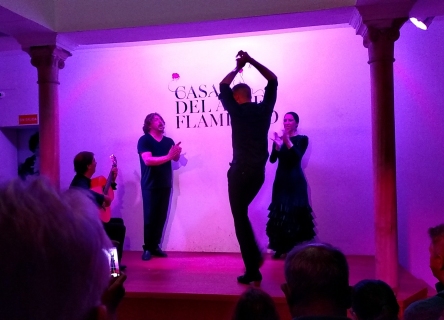 Intense amount of clapping, even while dancing. 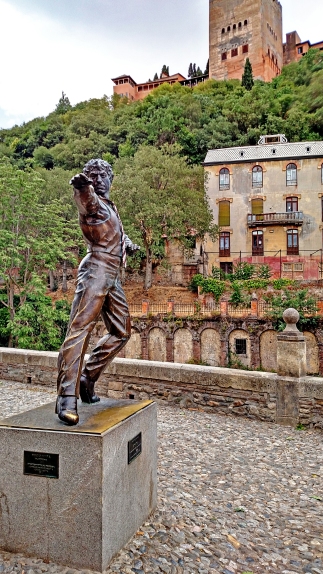 There’s even a statue in town for it.

Food in Spain was confusing for us to figure out because they eat meals much later and snack more often.  For example, we went out for breakfast at 9 and couldn’t find anything open until lunch, so we got corner store snacks and tried again later.  I’m sure Spaniards have a better process for this, but google wasn’t too helpful.

Why you should go to Granada:

This was country 6 of our 6 country Euro Trip.  To read a summary of the trip, click here.

Country 5: Italy, read about Lake Como, Venice, Portovenere, Cinque Terre, Rome, Florence, or my final thoughts.  (I had a lot to say about Italy, as you can see.)

Stay tuned next week for a post on Barcelona, our last stop on our Euro Trip. 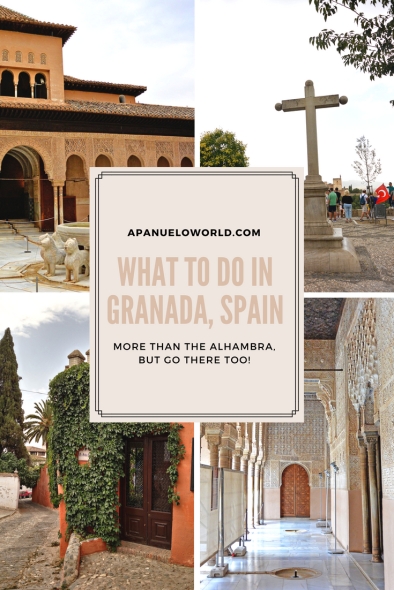 2 thoughts on “Spain, Before Columbus”

Spring in NYC this year feels like hope. And, so far, has been very delicious. I blogged about it if you want to know more. Link in bio, as always.
I made a list of how I will know the pandemic is over. I'm curious, what's on your list?
For your travel Tuesday, I present, that one time I traveled this year. #upstateescape #linkinbio #newyork
I'm a big fan of social distancing and population control in traditionally packed tourist spots. Nothing like zero lines, elevators to ourselves, and a leisurely 2 hours at the Top of the Rock on a beautiful October day. Win win win. Highly recommend.
Well this is fun... my travel guide to NYC has found it's way to print. Check it out @daughtersofpromise!
Last post for the Quarantine Chronicles series. (Also, my last day of quarantine. Hooray!) Link in bio!
Today the topic is Brooklyn post-COVID peak. Follow the link in my bio.
Another day, another post. Link in bio.
Day 2 of my Quarantine Chronicles is a travel guide to Niagara Falls, Toronto, Canada, and Buffalo, NY. Link in bio, as always. Enjoy!
Follow A Pañuelo World on WordPress.com
Loading Comments...
%d bloggers like this: